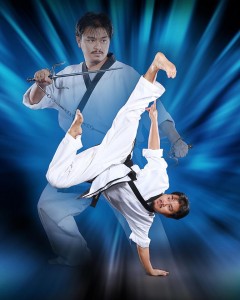 Mr. Javins first began studying taekwondo in September, 1996 under Mr. Ed Betancourt. By 1997 Mr. Javins participated in his first ITC tournament in Sacramento, California where he took second place in the forms competition, but what he really wanted was to spar. He got his chance in August 1997 when he participated in the Master Jack Corrie Tournament in Folsom, California. He took second place in forms and third place in sparring.

Mr. Javins studied various different martial arts prior to receiving his first degree black belt in taekwondo. These styles include kali, jiu-jitsu, karate, WTF taekwondo, wushu, tai chi and street defense. This body of knowledge influences his training techniques as an instructor at Parkside Self Defense.

Mr. Javins continues to judge and compete in tournaments and has been instrumental in developing a winning tournament team at Parkside Self Defense.

Classes will resume as normal today.

Due to a bug going around, Parkside will be closed today. Stay healthy!

We hope everyone is staying safe in this weather. With that said, if you haven't been able to bring in your secret Santa gift this

Depending on weather conditions we may cancel classes tomorrow.

Don't forget to bring your Secret Santa gifts today! You can pick yours up Monday through Wednesday!

A couple of reminders! 1) Testing is today! Please make sure nails are trimmed, especially those of sparring rank. 2) If you purchased a Mystery

Remineder: no classes today, we are closed!

Hoodies are in stock!

All professional photographs on this site are used with permission of StrikingImage.com. We highly recommend Striking Image for your martial arts photography.